Saddle Manufacturers Use Thermal Cameras For A Better Fit 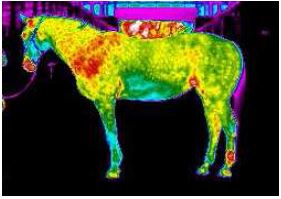 Infrared thermography is proving to be a valuable asset for saddle manufacturers, with many operations either owning a thermographic camera or using the services of a professional thermographer to aid their research.

The cameras are primarily used to help saddle manufacturers better understand the relationship between saddle, horse and rider.   The information that these cameras provide is especially valuable given that horses’ backs were not designed for humans to sit on, let alone be ridden for extended periods of time in demanding conditions.  Manufacturers and saddle-fitters use the information to design and adjust equipment for optimum comfort and performance.

The coloured thermal images from the cameras reveal substantial detail about the many factors that come into play regarding saddle fit (including bridging, rocking and uneven packing) but they can also play a valuable role in eliminating damage caused by ill-fitting saddles.

Ill-fitting saddles can cause a horse extreme pain and much of the blame has been laid at the feet of saddle fitters.

When a horse is in pain, it can manifest in what many call ‘naughty’ or ‘bad-tempered’ behaviour.   Shying, lying down when the saddle is put on and hollowing their backs are just some of the behaviours that some horses exhibit when being dressed, yet these are not evasions but are in fact, reactions to pain.

Pain can be the underlying cause of many behavioural problems but the reality is that the non-verbal animal is simply reacting to severe discomfort and soreness which is very often caused by an ill-fitting saddle.

Saddle-fitting has come a long way since the days of propping up one that sat a bit low on the spine with a rolled-up towel , adding a pad if it was too loose or using a bigger pad if the saddle was a bit tight.  Back then, little consideration was given to the effect that all of these actions had on the horse’s comfort (or rather, discomfort).

Thankfully, research and technology have led to a much greater understanding of the changing dynamics of saddle-fitting and also the need to examine the animal holistically to ensure that the fitting is adjusted correctly.

Thermography not only shows how well (or how badly) a saddle fits by highlighting areas of temperature variation, but it also plays a key role in many other aspects relating to the horse’s health and in particular, the source and reasons for pain.

Here’s an example.  A horse required visits to the chiropractor every two weeks.  He had an old scar on his leg which was deemed by many not to be a contributing factor, plus the owner felt that the saddle was compounding the problem.   Thermal imagery however, showed a major temperature difference on either side of the scar which persisted down to the hoof causing circulation issues, which ultimately resulted in the horse carrying himself awkwardly.  Correcting the hoof-related problem was a major step towards more comfortable movement, a change in body shape and ultimately a better-fitting saddle.

Poor saddle fit not only takes the blame for sore feet, but often takes the rap for numerous other movement-related problems.  For example, a horse that was exhibiting a variety of issues including laminitis and which had been extensively tested (including for saddle-fit) underwent widespread thermal imaging.  This revealed hoof problems which were then corrected by a change in diet and new trim.

There are also instances where thermography has identified bad teeth as the reason why an animal is bracing – and not back and saddle problems as had been originally thought.  Once the horse’s head issues were resolved, the animal’s body was more relaxed and the saddle could be adjusted for a comfortable fit on the changed body shape.

Similarly, thermography is proving to be a valuable asset in identifying tendon injuries in horses where the animals compensate laterally and diagonally to alleviate their pain.

An ill-fitting saddle can cause significant damage to a horse, but increasingly affordable thermographic cameras and a greater understanding about the relationship between horse, rider and saddle are making a significant contribution to making the experience as comfortable as possible.

Infrared thermography is a useful tool in saddle-fitting with many leading manufacturers making use of this technology to develop riding equipment that combines functionality with performance.  For example, the website of National Saddle Centre USA says it endorses and supports ‘efforts to scientifically analyze how tack fits and functions, including the complicated interplay between horse, rider, and tack. We routinely utilize advanced technology such as computerized pressure testing and thermography in order to better understand saddle, pad, and girth fit. This has become an integral part of our product development process.‘

For more information on thermal imaging cameras, please get in touch with technical equipment specialists in Australia, Nexxis.  We offer a range of leading thermography brands including the high-tech FLIR cameras.

Written By NexxisJun 15, 2018 · 4 min read
Previous
Next
Join our mailing list // Discover a world of forward-looking solutions designed to shape the future. Ready?