When we talk of life-saving equipment, most of us immediately think of medical devices like mechanical CPR machines, ventilators and defibrillators.  We don’t usually think about devices that test the concrete of the bridge that we’ve just driven over or that check the welds on the plane that we’ve just flown thousands of kilometres in, yet these products are responsible for saving millions of lives every single day.

Non-destructive testing (NDT) is a vital part of many industries and it describes a batch of techniques and processes which are used to identify potential mechanical and structural failures on equipment and materials.

From testing spindles on public buses and cables on lifts to searching for minute cracks on the turbine system in an aircraft’s landing system and testing tanks for gas leaks, NDT meets a critical need when it comes to ensuring the safe operation of many different systems and products.  Without it, the world would be a very different place.

Of course, NDT equipment isn’t able to eliminate every danger but it does play a vital role in detecting flaws and potential flaws – thereby pre-empting potential catastrophic failure and cost to human lives.

Consider a concrete road bridge that supports thousands of vehicles every hour.  Inferior quality of construction or any number of other processes (including physical issues like overloading, shrinkage, frost action, fatigue and abrasion or chemical issues like expansion, acid action, weathering, salt chloride attack etc) mean that it will undergo a loss in structural integrity over time.   Without regular testing to ensure that these processes aren’t materially impacting on the safety of the bridge, lives could be at risk.

The closure of the Fremantle Traffic Bridge in Perth in April 2016 is a case in point.  Engineers inspected the bridge as part of their ongoing maintenance checks and found erosion at the foundation of one of the bridge’s piers.  The bridge was closed to traffic as a precautionary safety measure whilst authorities undertook further examinations and strengthening works.

People travelling across the Highway 35 bridge which connected Point Pleasant, West Virginia and Kanauga in Ohio in December 1967 weren’t so lucky.  A cleavage fracture in one of the eye-bars in the suspension chain caused the bridge to suddenly collapse, resulting in the deaths of 46 people.  Inspection technology at the time wasn’t capable of detecting the crack and the only way that the failure could have been found was if the eye-bar had been disassembled. 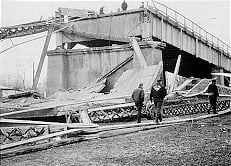 NDT technologies and techniques have thankfully advanced hugely in recent years and have transformed the scale and scope of inspections of critical infrastructure and equipment.

Here are a few examples of life-saving NDT techniques that impact on the day-to-day safety of ordinary citizens:

To find out more about NDT for the safe and cost-efficient inspection of huge variety of operations including offshore oil rigs, bridges, subsea applications, aircraft engines, machinery, mine shafts and manufacturing facilities, you should talk to the experts at Nexxis.