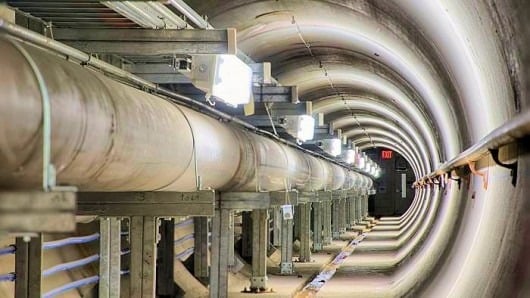 Pipeline accidents are common – and the consequences can be disastrous.

An analysis of federal data by the Associated Press revealed that the number of significant accidents on oil and petroleum pipelines in the US had increased annually by nearly 60% since 2009.  Since 1995, over 2 000 significant accidents had occurred, adding up to roughly $3 billion in property damage.

Property damage is only one consequence of a pipeline accident however.  Human injury and death, environmental damage, legal ramifications and many other operational issues are all possible consequences and are the reasons why the oil and gas industry allocate such significant time and resources towards testing their pipelines for leaks and weaknesses.

Non-destructive testing enables leaks to be located using various non-invasive methods including pressure, ultrasonic and radiography testing.  These are far more productive and cost-effective than the traditional procedures of leak detection which require physical access to the walls of the pipeline, essentially shutting down production while technicians cut into the material to identify or repair a problem.

The research also showed that close on two thirds of the leaks were linked to corrosion or material, welding and equipment failures, issues which are commonly associated with older pipelines.  With around 55% of the 217 000kms of oil and gasoline pipelines in the US installed in 1969 or earlier, and some sections as much as 100 years old, the importance of leak detection and testing to improve pipeline sustainability is patently obvious.

Pipelines are vulnerable to internal and external corrosion, manufacturing flaws, damage from third parties and other issues and regular inspections are necessary for early detection of these.

Given that many companies still rely on ageing infrastructure and are also expanding their new pipeline networks, advanced non-destructive leak testing which enables pipelines to go back into production much more quickly, has become a critically important element of their daily operations.

But non-destructive leak testing isn’t confined to evaluating existing pipelines, it also fulfils an important role during the initial construction process as well as during the pre-commissioning phase.  The benefits are both immediate (identifying potential flaws that can be sorted out before the pipeline goes into full production) and longer-term (diminishing the likelihood of mechanical failure during production) with the result that companies are less likely to face legal, safety and environmental risks because the sustainability of their pipelines has been improved.

In a nutshell, here are some of the main benefits of non-destructive leak testing in pipelines:

Some of the more common NDT methods for evaluating pipelines are:

Each of these methods provides engineers with crucial real time information which enables them to take the necessary steps to fix or prevent leaks in the pipeline and ensure long-term asset integrity as well as compliance with regulatory standards.

If improving the sustainability of your pipeline is a priority for your operation, you should contact the experts in specialist non-destructive testing and remote visual inspection equipment, Nexxis.  We offer a global network of best in class products and experts.