The following case study of a complex alignment challenge clearly illustrates the versatile power of the Easy Laser E710.

The challenge was to align two sheaves, each a metre in diameter and approximately 12 metres apart.  The substantial distance between the two sheaves meant that conventional line lasers (which have a maximum capability of around 3m) were unsuitable, plus the job was complicated by the fact that there were several physical barriers between the two sheaves.

The goal was to align the sheaves in both horizontal and vertical planes to within 0.10 or a slope of 1.745mm per metre.

An Easy Laser E710 alignment system was chosen for this particular challenge.  This high-end system uses powerful dual point lasers for advanced shaft alignment as well as for geometric measurement (including straightness, flatness/twist and parallelism) and has a working distance of up to 20 metres. 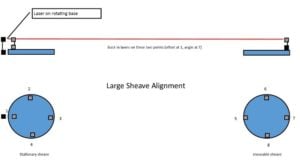 One of the laser heads (the transmitter) was first mounted on a magnetic base with a rotating head, and then mounted along the machine’s superstructure close to the centre line of the sheave that was stationary.  The laser was then aimed along the centre line.

In order to achieve a clear line of measurement along the structure, the detectors were extended from the magnetic bases with 30.5cm rods.

The transmitter on the Easy Laser E710 was then ‘bucked-in’ between point 1 and point 7 on the graphic.  (‘Buck-in’ describes the process of adjusting a laser transmitter’s angular pitch and the detector’s vertical offset to maintain a line-of-sight or straight line between the laser and the usable detector space).

Bucking-in was a simple process which only required a few minutes to complete, after which the straightness programme was used to take measurements at points 1, 3, 5 and 7.   With points 1 and 3 used as a reference line, the readings showed that the horizontal parallel alignment of the two sheaves was within 0.050 but that that they were offset by around 1.27cm.

The next step was measuring the vertical alignment.

Whilst keeping the laser transmitter stationery, the technicians first swept the rotating head to measure the slope from point 2 to point 4 (with the measurement being 6.028 mm/metre).  They then applied the same process to the slope between point 6 and point 8, with the measurement of 6.0222mm/metre being a near perfect alignment of 0.00030.

The Easy-Laser E710 proved to be the ideal system for the tricky coupling alignment challenge, with the customer going on to take advantage of the system’s power and versatility to perform numerous other measurement jobs.

In many respects, the attributes of this new generation shaft alignment system and its versatility represent Nexxis’ solutions-driven approach to business.  We’ve built a reputation for delivering high-performance, flexible and value-based technical equipment solutions that don’t just suit our customers’ immediate needs but which are tailor-made to adapt to meet future circumstances.

To find out more about the Easy Laser E170 shaft alignment system, or to see how our holistic approach to technical equipment can benefit your operation, please get in touch with our industry experts on 08 9418 4952 or visit nexxis.com.au.